Average rents in Taguig now higher than in Makati 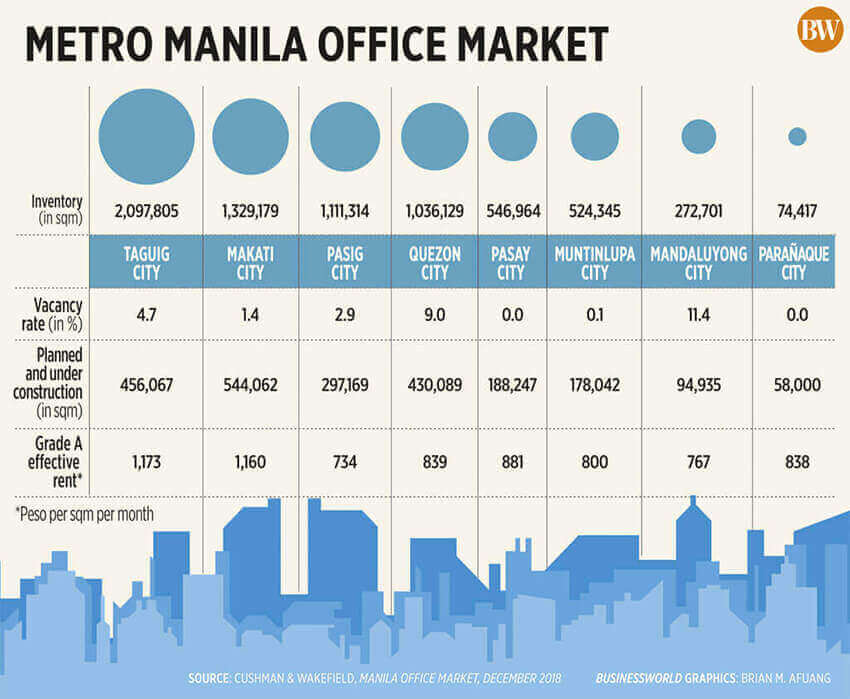 The average rent for office spaces in Taguig City is now more expensive than those in Makati City, according to a report by Cushman & Wakefield Philippines.

“Fueled by the high asking rents of newly completed buildings, as well as the jump in the rates for buildings that were previously fully-leased, average Taguig City rental figure for year-end 2018 has gone up by 14% YoY (year-on-year) to P1,173 per square meter/month (sq.m./mo), overtaking for the first time that of Makati City at P1,160 sqm/mo with a recorded increase of just 4.3% YoY,” the commercial real estate services company said in its MarketBeats Q4 2018 report.

Cushman & Wakefield identified three significant projects under construction in Makati and Taguig as the NEX Tower, Eco Prime and One Ayala Tower.

Alpha Plus Property Holdings Corp. is on track to complete Eco Prime in Taguig by the first quarter of 2019.

On the average, average rent in Metro Manila increased by 7% year-on-year to P899 per sq.m./mo.

In terms of vacancy rate, Cushman & Wakefield noted that Mandaluyong City recorded the highest vacancy at 11.4% among the submarkets. Quezon City followed with a 9% vacancy rate; Taguig City with 4.7%; Pasig City with 2.9%; and Makati City with 1.4%.