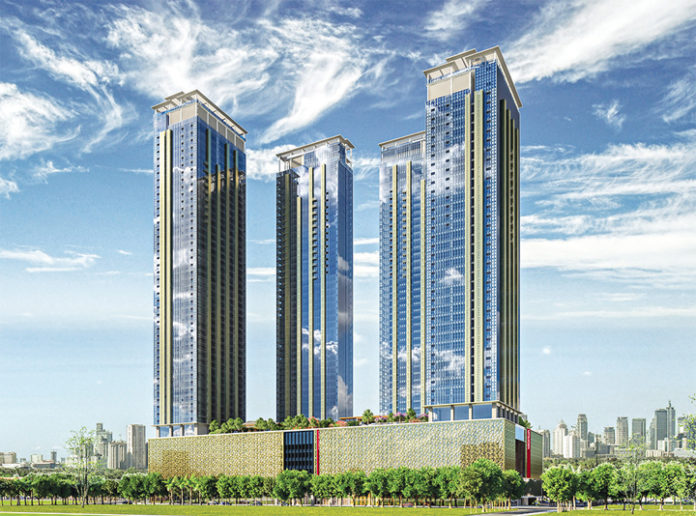 Considering that the Philippines is prone to earthquake and other seismic activities being located in the Pacific Ring of Fire—the recent of which were the 6.1 and 6.5 magnitude tremors that jolted Zambales and Eastern Samar, respectively, on April 22 and 23—Federal Land Inc. (FLI) is employing anew the state-of-the-art damper systems of Philippine Nippon Steel (PNS) to its upcoming mixed-use project called The Seasons Residences at the Grand Central Park in Bonifacio Global City, Taguig.

In partnership with Japan-based conglomerates Nomura Real Estate Development Co. Ltd. and Isetan-Mitsukoshi Holdings Ltd., this lifestyle center is FLI’s second project after the Grand Hyatt Manila—also in BGC—to use the shock absorber solution, not only as part of its goal to marry Japanese innovation and design with the Philippines’s unique brand of community, but also ensure the comfort and safety of end-users in times of such natural calamities.

“This earthquake-proofing technology that safeguards actually the buildings are what the Japanese are well-known for. So we decided to introduce that technology to this project as well,” FLI Executive Vice President Cathy C. Ko said during their media briefing held recently at The Seasons Residences’s showroom in BGC. “Again, we didn’t have to do this, but we wanted that extra safeguard for our future residents.”

To date, dampers are among the biggest innovations throughout the history of building and construction industry. They are highly utilized in response-controlled structures worldwide, mitigating the potential impact of earthquakes and typhoons.

Nippon’s vibration control devices are more commonly known as visco-elastic coupling dampers (VCDs). While there is no specific height requirement to use them, they are proven effective for structures, especially high-rise ones, whenever there is small ground shaking or strong wind.

“Every building whether low-, mid- or high-rise needs to be designed to resist earthquake,” Ove Arup & Partners Hongkong Ltd. Managing Director Raul V. Manlapig said, while citing that it applies more in tall buildings simply because a lot of energy is required to shake them during a seismic occurrence.

Under typhoons and earthquakes, buildings vibrate back and forth, deforming VCDs in an outrigger configuration. Multilayers of high-damping material are sheared, transferring vibrational energy safely into heat.

“We are using fourth-generation [Visco-elastic or VE] material. This is the most durable and highest-performing damping material,” boasted Sugihara. “In addition, VE material has a usable life well beyond 50 years. So it means product life is longer than the building itself.”

Using VCDs, per the executive, brings more savings as it decreases upfront construction cost and materials caused by reduction of seismic and wind demand. Performance-wise, he said that it improves earthquake protection and increased safety, lessens damage under all levels of earthquake loading, enhances occupant comfort under wind loads, and improves building resilience and business continuity. What’s more, it’s 100-percent maintenance-free, he added.

First applied in the then World Trade Center in the United States, around 40,000 of Nippon Steel’s VE dampers are now being used in over 250 buildings globally, including the world’s tallest towers Tokyo Skytree and Taipei 101.

For The Seasons Residences, a total of 256 panels of VCD from PNS will be installed in four condominium buildings, from 42 to 51 story, comprising this project. Thirty-two of which will be attached to the outrigger flag walls of Tower A, whose ongoing construction is due for completion by 2023. The next three buildings will have 32, 64 and 128 panels, accordingly. Each of them is scheduled to be finished two years apart, starting 2025.

Though expensive, FLI, a member and one of GT Capital Holdings’s property arms, is open to roll it out to future development projects if needed, according to Ko. She said: “Each project would have a different design or shape of a building. So we actually assess what is best. But definitely all our projects are designed with the comfort, protection and safety of our future residents in line.”